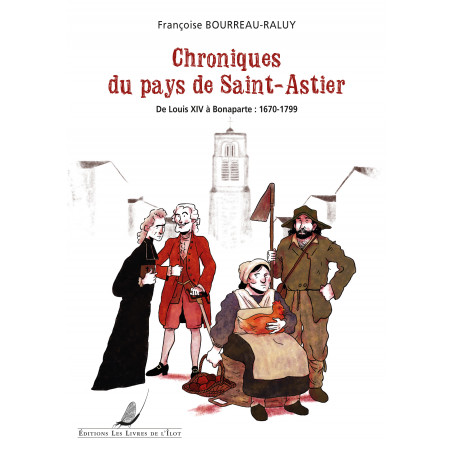 Chronicles of the country of Saint-Astier From Louis XIV to Bonaparte: 1670-1799

Let us go to the country of Saint-Astier, on both sides of the Isle valley, to meet those who lived there, at the time of kings Louis XIV, XV and XVI, whether they are noble lords, canons, common people, bourgeois, peasants, men, women and children, young and old. Let us accompany them during the ten years of the Revolution.

The author invites us on a journey back in time to meet a host of characters, thanks to the minutes of justice of the time.

This work is indeed the result of the examination of abundant archives. It plunges the reader into the time of the Sun King and leads him to the seizure of power by General Bonaparte in 1799. It is the people of Saint-Astier and the surrounding country, especially those of the parishes, then communes of Montrem, Saint-Léon and Saint-Aquilin, who are the heroes in spite of themselves: they are the victims or the culprits in everyday conflicts, but also in criminal cases. It is also the people embarked on the great revolutionary movement, alternately offensive or defensive, sometimes rioting.

If you are from this corner of the Périgord, maybe you will find one of your ancestors there?! More than six hundred surnames appear, as well as nearly one hundred toponyms, villages and localities.

Living in the Périgord for nearly thirty years, practicing hiking and botany since then, Françoise Bourreau-Raluy knows well the landscapes, villages, paths, and especially those of the Isle Valley. She took advantage of her retirement to also explore its archives, and meet those who made history. She has previously written a monograph on the history of her commune, Léguillac-de-l'Auche, from the Paleolithic to the digital age, and received the 2016 Clochers d'Or prize.