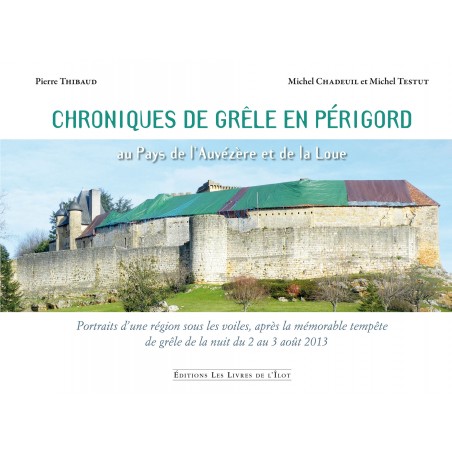 Coming from Périgueux and Trélissac, where he damaged hundreds of cars, the cloud, still dripping with large drops and pushed by an impetuous west wind, rushed into a wide corridor between the valleys of the Isle, by Sarliac and Savignac-les-églises, and that of Auvézère, via Le Change and Cubjac.

The hailstones began to do destructive work, on the side of the Isle, on the heights above the village and the castle of Mayac and on the Auvézère on the outskirts of Tourtoirac. In these vicinity, severe, sporadic showers damaged roofs in open country, as well as on businesses in the village.

in the Pays de l'Auvézère and Loue

Portraits of a region under sail, after the memorable hailstorm of the night of August 2 to 3, 2013

In these vicinity, severe, sporadic showers damaged roofs in open country, as well as on businesses in the village. After Mayac, the phenomenon amplified by reaching Chardeuil and Coulaures, when the hail, abrupt, fast and violent, caused in a few minutes irreparable damage on the walnut groves of the plain, piercing further east, abandoning the Isle and now following the valley of the Loue, wounding the countries of Excideuil, Génis, Hautefort ...